NFO Editor is a freeware program that for editing the NFO files that serve as a base for GRF graphic files for the game Transport Tycoon Deluxe, TTDPatch and OpenTTD.

After decoding a GRF graphics file with GRF Wizard and the GRFCodec, you’ll have an NFO (plain text) file, and one or more PCX or PNG image files. By editing the NFO file, you can alter the size and position from indivial game sprites (graphics). This is an almost impossible process to do by hand, while NFO Editor makes this a quick and effortless task. 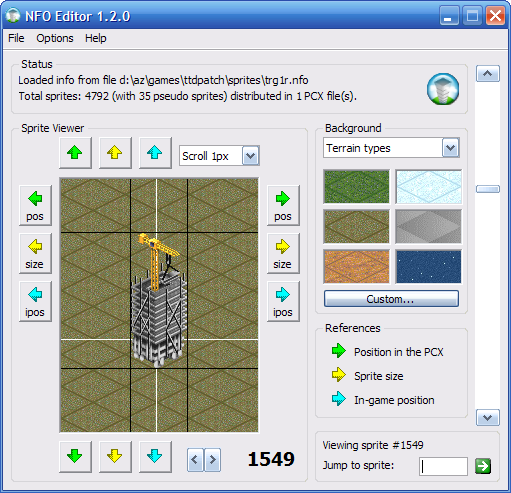 The program will only load NFO sprites decoded with the original GRF Codec (0.9.10) created by Josef Drexler (+GRF Wizard), and refuses to load sprites created with the GRF Codec developed by the OpenTTD team.

This program has a discussion topic here in the tt-forums.net. Feel free to post any feedback and suggestions there.