GTA Editor is a program that makes the installation of new vehicles for the video games GTA III and GTA Vice City a very easy task. The program allows manual edition of values from the default.ide and handling.cfg setting files, as well as easy importing of entire settings for certain vehicle. 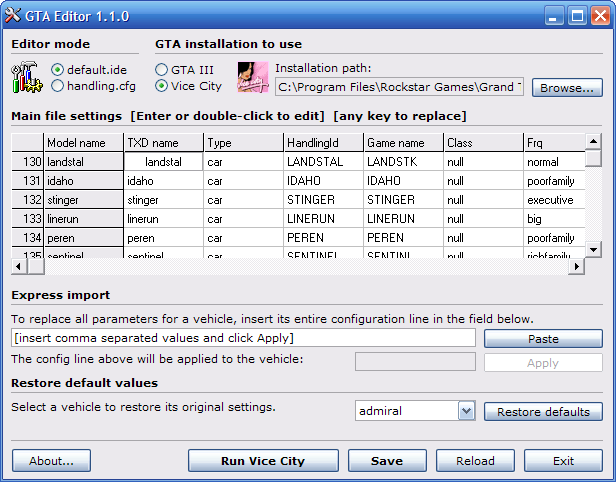 Grand Theft Auto is a 1997 action-adventure open world video game created by games developer Rockstar North. The game allows the player to take on the role of a criminal who can roam freely around a big city. Various missions are set for completion, such as bank robberies, assassinations, and other crimes. It is the first title in the Grand Theft Auto series, a series that has sold more than 125 million units, as of December 2012.

Grand Theft Auto is made up of a series of levels, each set in one of the three main cities. In each level, the player’s ultimate objective is to reach a target number of points, which is typically achieved by performing tasks for the city’s local crime syndicate. Each level has its own unique set of tasks. Successful completion of a mission rewards the player with points and opens the opportunity to attempt harder missions for higher rewards, while failure awards few points and may permanently seal off opportunities for more tasks. Completing missions also increases the player’s “multiplier”, which increases the points the player gets for doing other tasks.